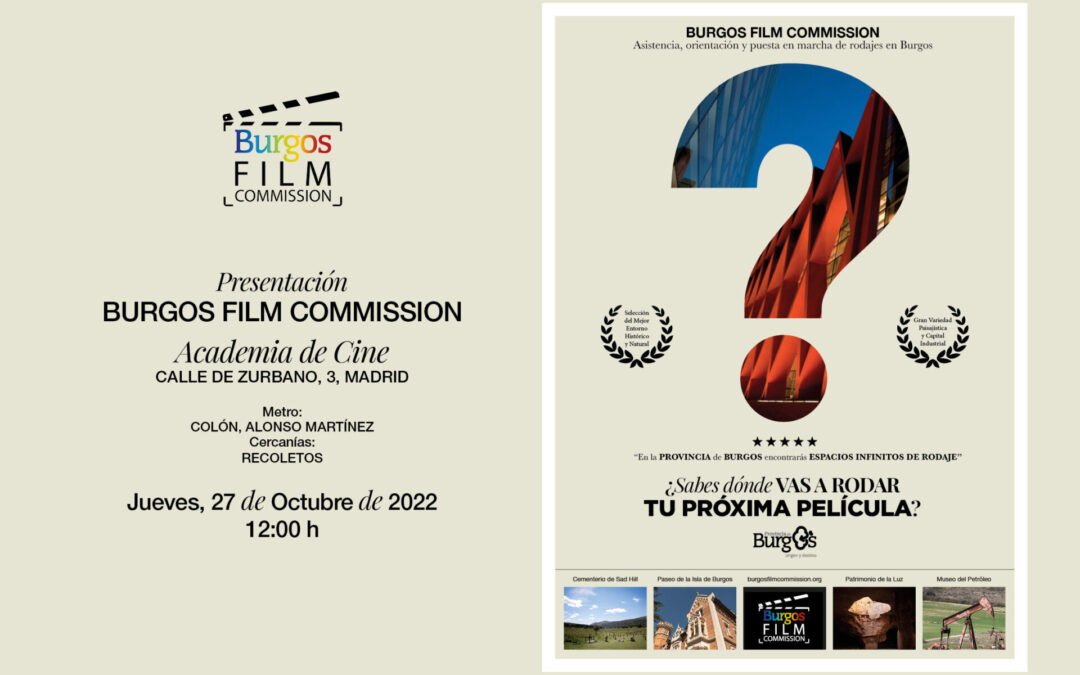 Burgos Film Commission is going to show first hand the attractiveness of its territory as a filming destination. Burgos is a Film Friendly territory to be discovered. More than 14,000 km2 of filming set with the technical means, human resources to materialise any audiovisual project and a filming office that facilitates all the procedures and needs. A filming office present in the Spain Film Commission network.

To demonstrate the potential of the province, the filming office will travel to the Academia de Cine for a presentation ceremony on Thursday 27 October at 12:00. The event will be enlivened by the musical interventions of Neonymus (responsible for the soundtrack of the series ‘Conquistadores Adventum’), whose sound is an ancestral evocation. A walk through the Origin and Destiny of humanity, the beginning of the journey through our unique locations. Subsequently, another series of places of great visual strength, little known and with great potential to host a film shoot, will be presented.

The province of Burgos has one of the most important cinematographic tourist sites: the Sad Hill cemetery. Sergio García, one of the founders of the Asociación Cultural Sad Hill and, at the same time, a technician of the Burgos Film Commission, will be the speaker.

This will be followed by a colloquium with people closely linked to Burgos who have already worked in the area. Actress and producer Carmen Ibeas will be present (as a film actress, her work in ‘Ama’ by Jùlia de Paz Solvas and ‘Estándar’ by Fernando González Gómez stand out, she is also co-producer of Varsovia Producciones) and David Andrés, CEO of RC Service (La Casa de Papel) and director of photography.

To finish, there will be a cocktail featuring products from Burgos.

Admission is free until full capacity is reached.