Vicente Aranda was a great lover of Burgos Cathedral and the atmosphere of the old town. His love for the city is reflected in three of his most successful films.
Amantes, Juana La Loca and Luna Caliente make up an authentic triptych about love and human impulses.

Fernán González Street next to the chapel of Los Condestables

The entire route is 100% accessible for people with reduced mobility except for the access to Fernán González Street from Santa María Square, which has a flight of stairs.

Vicente Aranda, one of the most important directors of Spanish cinema, was a great lover of Burgos Cathedral and the city and this is reflected in three of his most important films: Amantes, Juana La Loca and Luna Caliente. In all of them he portrays Santa María Cathedral and its surroundings as only a filmmaker of his stature can manage to capture them.

Aranda lived by and for cinema, becoming the director and screenwriter of an extensive filmography that spans from the second half of the 20th century to the first decade of the 21st century.

Amantes
In 1990, the director arrived in Burgos to shoot a story of love and crime based on a murder committed in 1948 in the city of Burgos and known as the crime of the canal. The cast of actors, Jorge Sanz, Maribel Verdú and Victoria Abril, the dark love story and the marvellous locations made it one of the director’s most successful films.
Aranda shoots several sequences in the area around the Cathedral, Fernán González street, in front of San Nicolás Church and in Sombrerería street, which is where Paco and Trini (the lovers) stay when they arrive in Burgos (at number 2 between Santos Soria haberdashery and Teodoro’s hat shop)
The crime scene takes place in the  Santa María Square and, thanks to the unexpected snowfall that day and the planning of the editing carried out by the technical team, it can be said to be one of the best and most beautiful sequences filmed by Vicente Aranda.

Juana La Loca
Ten years after shooting Amantes, Vicente Aranda returns to Burgos with the intention of shooting part of his new film in the real locations where the historical events between Felipe El Hermoso and Juana of Castile took place. The first problem they encounter is the refusal of the Cabildo to film inside the Cathedral of Santa María, so they have to move the filming to the interior of the Cathedral of León.
Aranda’s plans also included filming in the Casa del Cordón, the residence of the Constables of Castile and the place where Felipe El Hermoso died in 1506, but the remodelling carried out by Caja de Burgos in the 1980s made it impossible for the director to recreate a 16th century palace.
After Vicente Aranda’s disappointment at these two setbacks, filming in Burgos was limited to a sequence in Fernán González Street and in the Plaza de Santa María.

Luna Caliente
In 2009, Aranda again chose Burgos to shoot a film of obsessive love against the backdrop of the Burgos Trial, the court martial that Franco’s dictatorship carried out against 16 militants of the terrorist group ETA. The trial took place in the courtroom of the Military Government in September 1970.
Although the city of Burgos was recreated in Toledo and Madrid, the Catalan director could not resist the temptation to shoot in the streets of the old part of the city. The Plaza de Santa María, the steps and façade of the Church of San Nicolás, the Arch of Santa María and the façade of the Mesón Los Infantes were some of the locations chosen for what was to be Vicente Aranda’s last film.

Next to the city’s main square is Sombrería street. In its mythical arcades Vicente Aranda filmed the entrance to the accommodation where the main characters of Amantes stay when they arrive.

The Arch and bridge of Santa María are the backdrop for several shots in the film Luna Caliente. 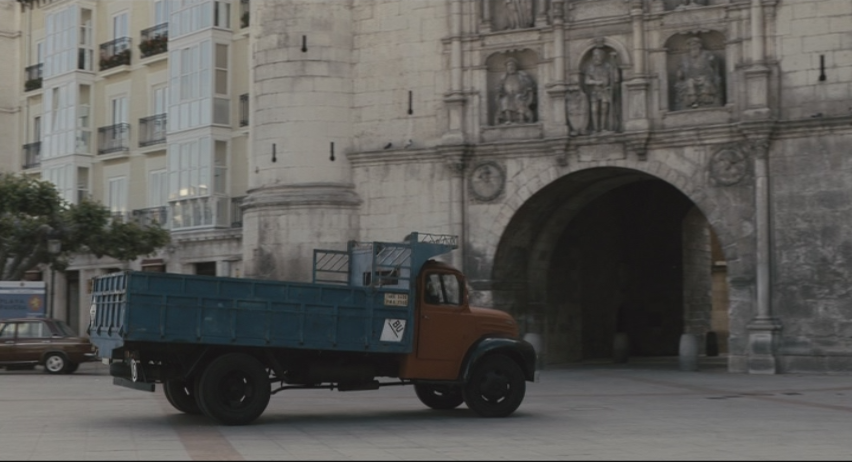 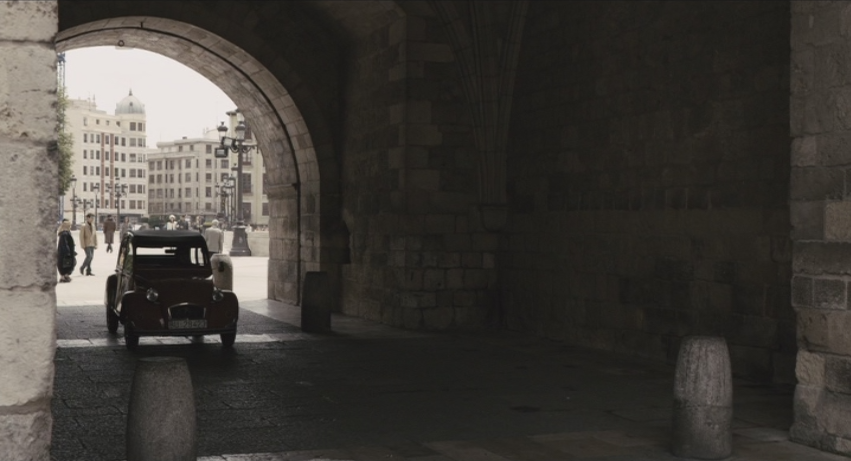 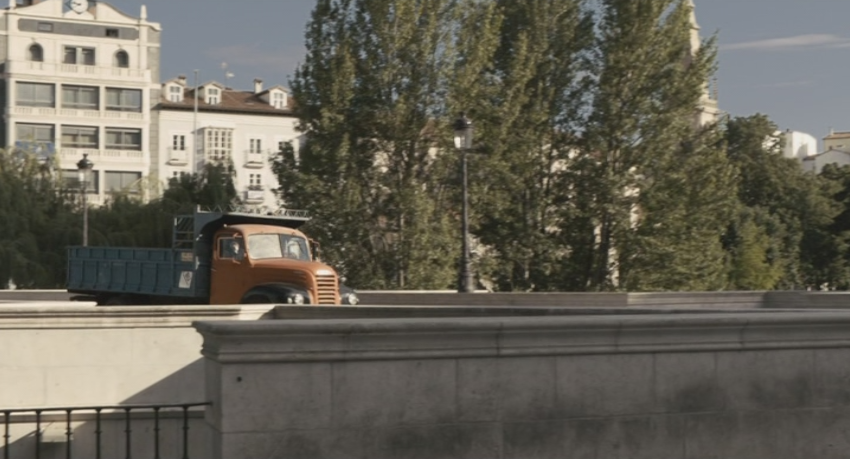 The discreet alleyway next to the Santa María arch and the Plaza del Rey San Fernando with the Mesón de los Infantes in the background was the space chosen by Aranda to continue the plot of Luna Caliente through the city centre. 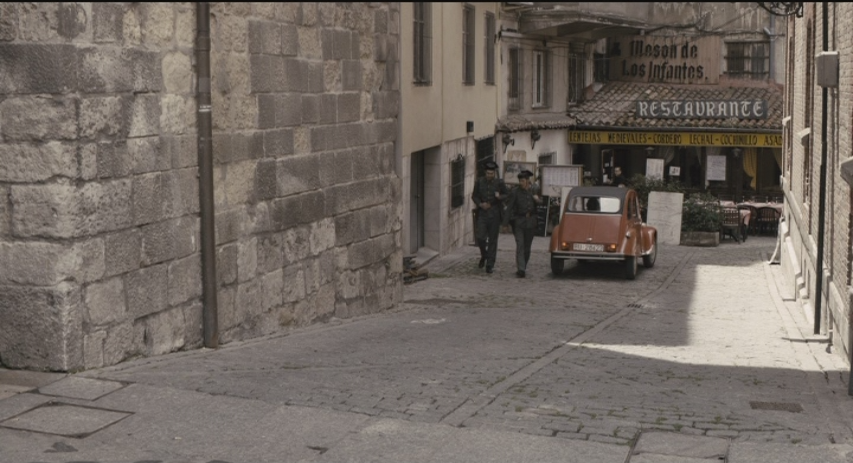 Some scenes in Luna Caliente take place in Santa Águeda Street with the imposing façade of Santa María Cathedral in the background. 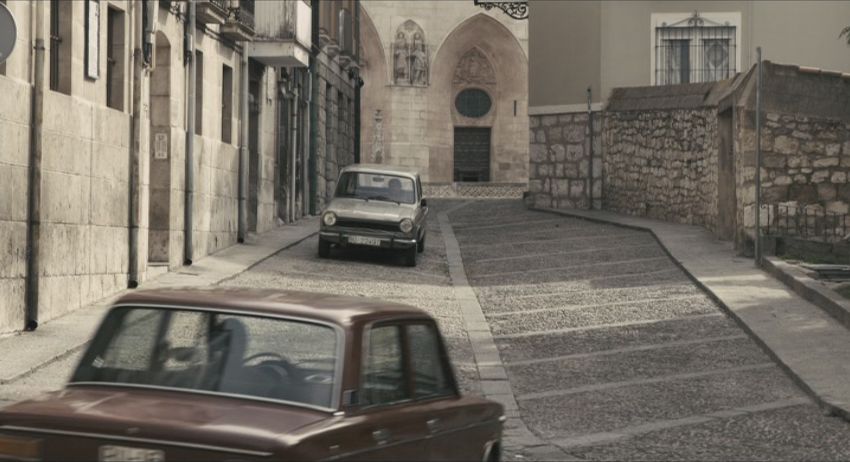 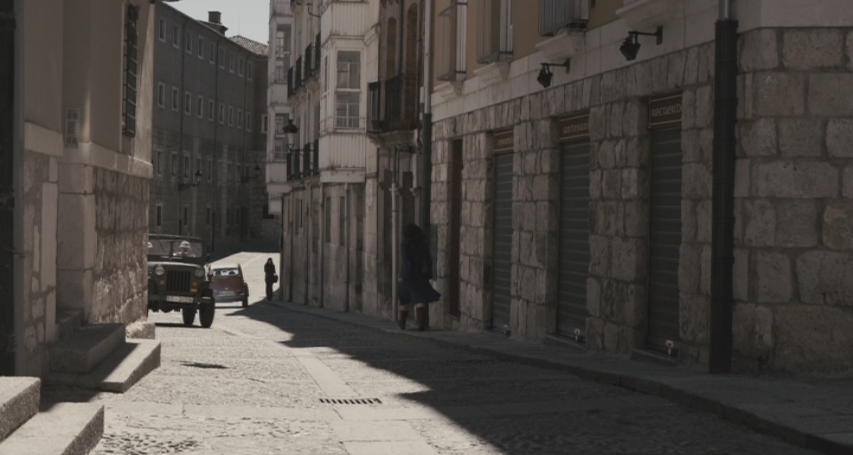 Santa María Square is, without doubt, Vicente Aranda’s star location in Burgos, appearing in all three films. In Amantes, it is the place chosen by the director to perpetrate the crime that is at the heart of the film, as well as the meeting point for several scenes. In Juana La Loca, it is the setting for the triumphal entry of Queen Juana I of Castile and Felipe el Hermoso into the city, while for Luna Caliente several scenes are filmed. 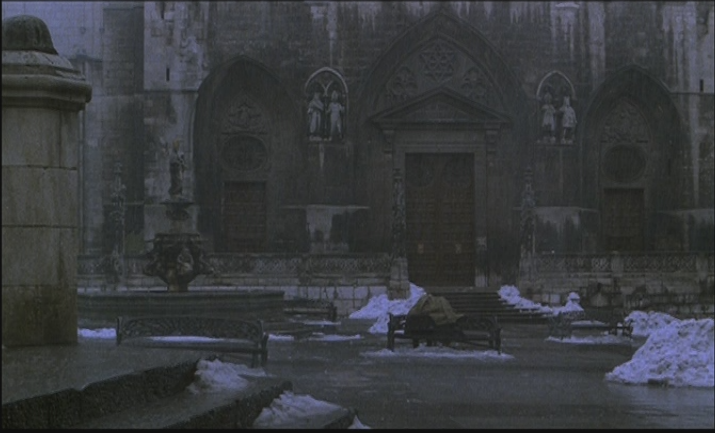 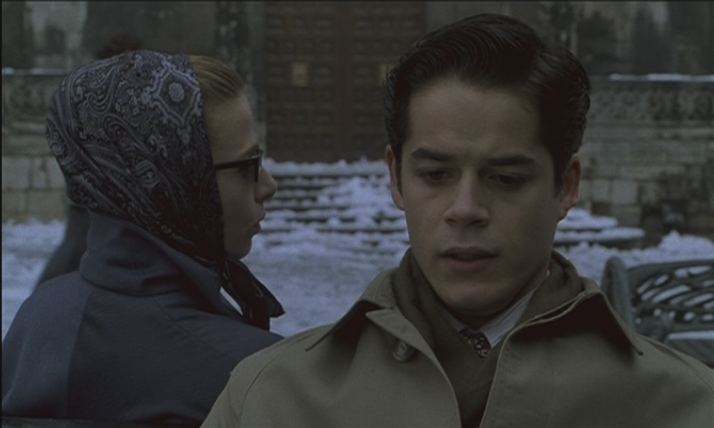 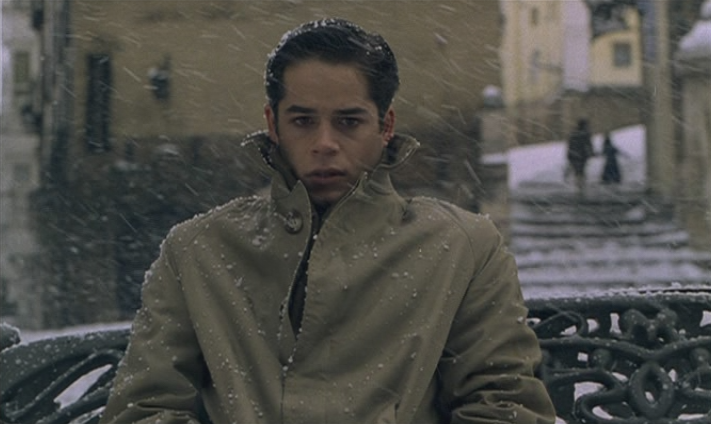 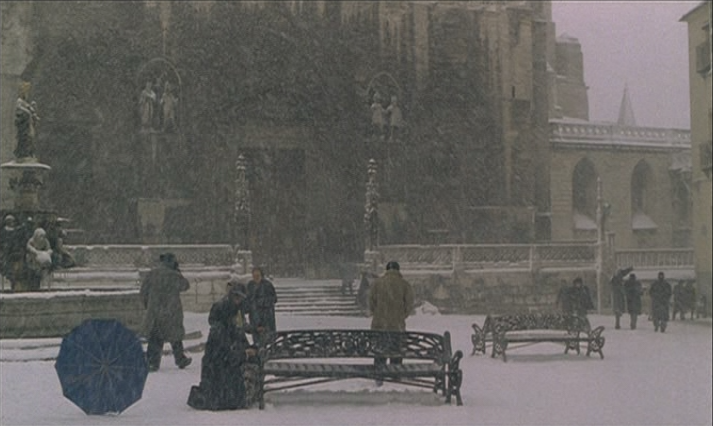 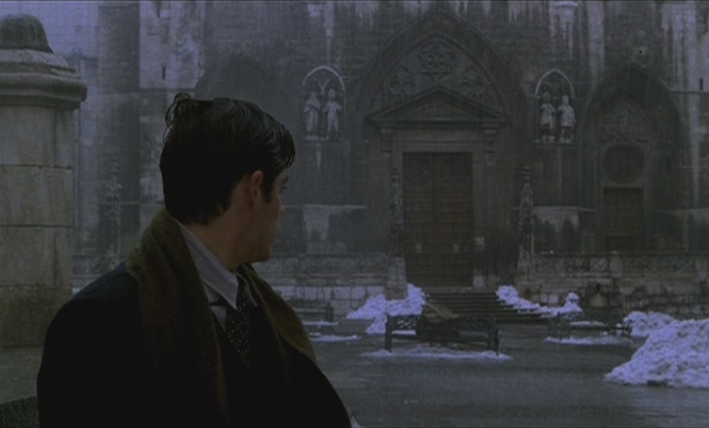 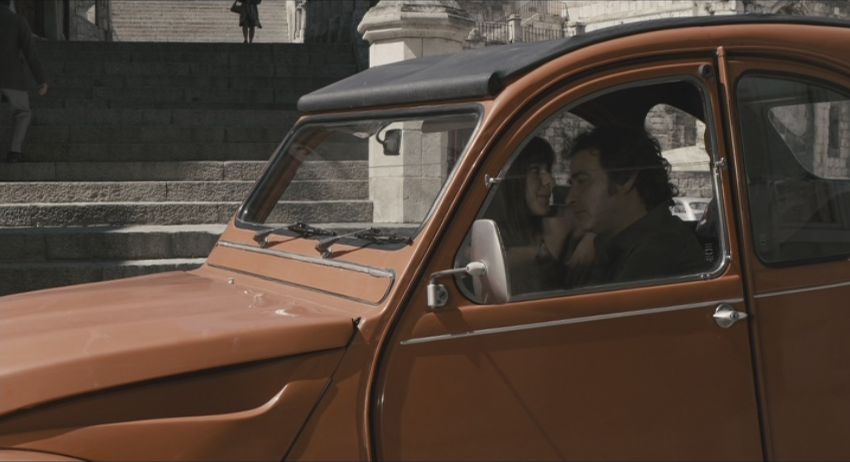 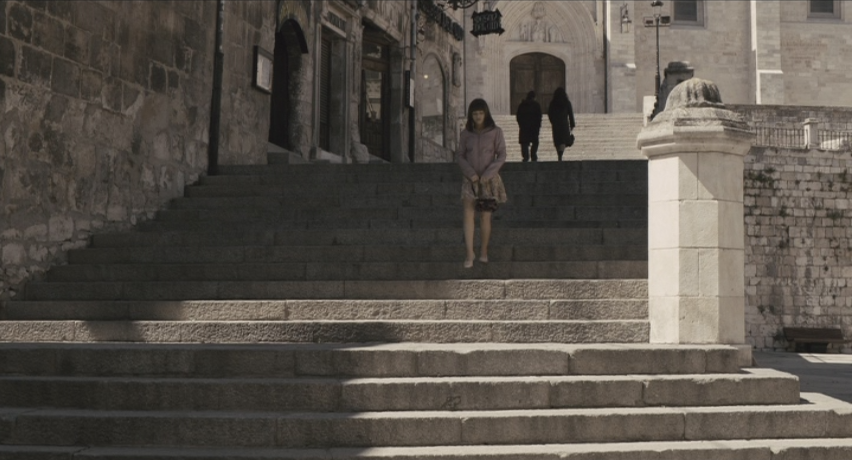 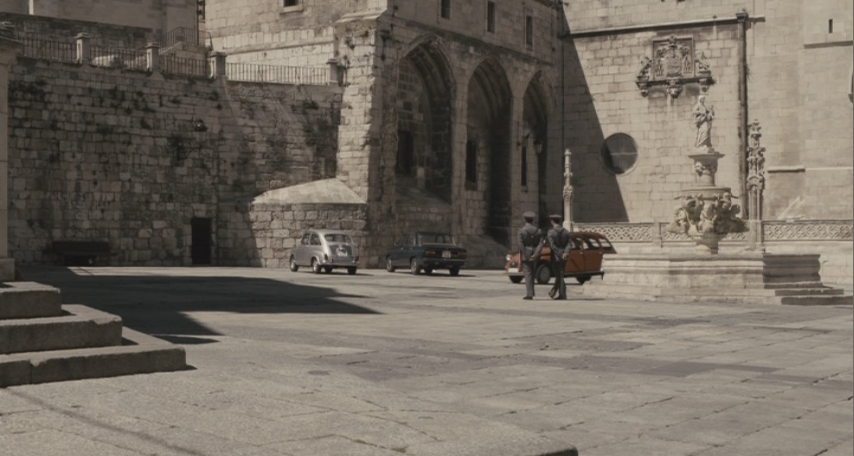 Fernán González Street is accessed via the Azogue steps, the place chosen for Amantes and Luna Caliente. There are some beautiful images of the Santa María Square from this place in Amantes and in Juana la Loca it is the space where the horn blowers are located. 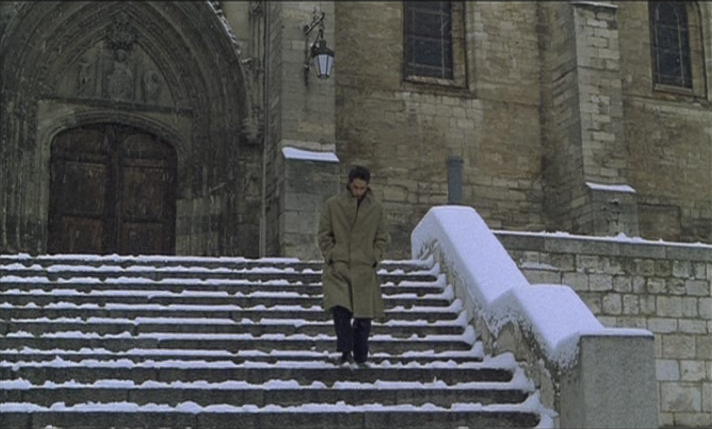 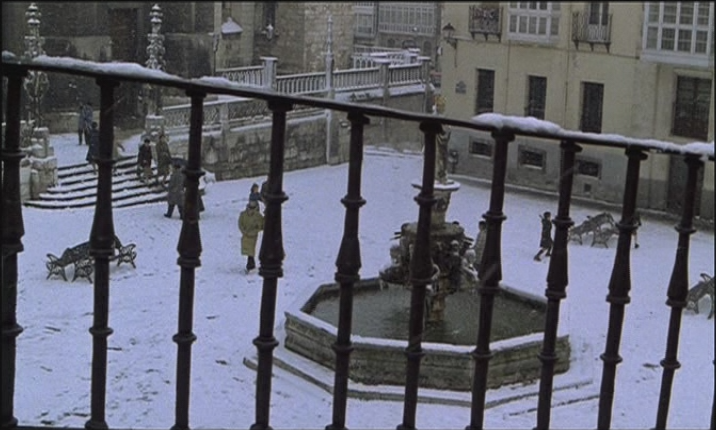 Fernán González Street next to the chapel of Los Condestables

Paco (Jorge Sanz) walks around the city giving us the opportunity to enjoy the cathedral from another perspective by visiting this location. 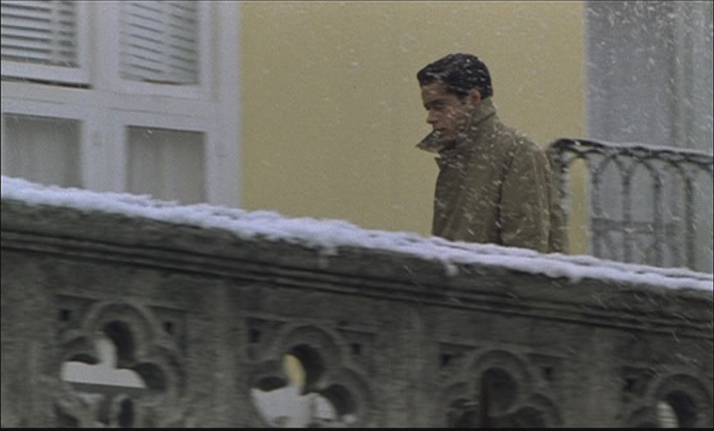